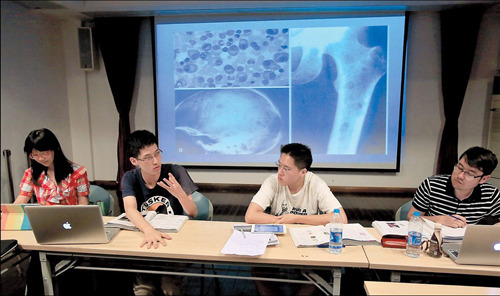 Members of the Shanghai USMLE Group at one of their gatherings yesterday. — Wang Rongjiang

“Grey’s Anatomy,” the popular United States television series, is becoming a reality show for Shanghai medical students who want to become doctors in the US, but none will have the time watch it now.

They are too busy preparing for the United States Medical Licensing Examination, which is believed to be the most difficult professional standardized test in the world.

It consists of three steps, and two must be conducted in the US.

The television series takes its name from Gray’s Anatomy, a classic English language textbook of human anatomy originally written by Henry Gray and published in 1858. No doubt the latest edition of the book sits somewhere in the stack of materials students need to help them pass the exam.

After passing Step 2, applicants and hospitals recruiting resident physicians go through a matching procedure after interviews. Each side lists its preferences and a computer decides which applicants should go to which hospitals for residency.

Gao Shan flew to the US in late June after being recruited by the University of Toledo Medical Center.

“No matter where I end up, the experience of taking the exam and being trained in the US will always be treasured,” she said. “The knowledge and skills I learn will always be with me, and, more importantly, I will see the world from a different point of view.”

Gao is a founding member of the Shanghai USMLE Group, an organization named after the exam. It was established in 2009 by students from medical schools at Fudan and Jiao Tong universities to share experiences and academic materials related to the exam.

Why are some Shanghai medical students keen to go abroad to practice?

Heavy workloads and low pay in Chinese hospitals are believed to be major contributing factors. But some medical students simply said they believe working in hospitals in more developed countries will enhance their professional credentials and make them better doctors. Many of them say they will return to China one day, bringing those advanced skills back with them.

Gao said the US licensing exam takes a long time and a lot of energy to prepare for. The interviews and matching process are just hurdles, and then the hard work of actual resident practice begins.

“But if you go through all this, you emerge a whole new person, much stronger and more mature than you have ever dared to imagine,” she said. “I’m not saying residency in the US is the only right way to go or is somehow superior. But if we believe the status quo in China needs to be changed, then we need to be the agents of that change.”

There are thousands of medical students majored in clinical medicine at medical schools of Jiao Tong, Fudan and Tongji universities and the Second Military Medical University in Shanghai, but no estimates on how many of them are planning to take overseas exams for residency. USMLE members said about 30 percent of medical students may think about taking the exam, but less than 10 percent actually proceed.

Fewer than 10 students took part this year, a member said.

“We are not afraid of losing our top students,” said Huang Gang, the school’s director. “With Shanghai’s development, we will need more medical talent with international backgrounds and outlooks. Having 10 of our 100 students go abroad and then come back and serve local hospitals is better than having no one going abroad.”

Currently, the USMLE Group has about 50 members from medical schools in major local universities. Anyone who wants to join must first read four books required for the test and do a presentation of their medical studies and goals. Applicants need to show dedication and determination and must be recommended by two existing group members.

“Preparing for the exam is a big challenge and we want to make sure every member takes it seriously,” said Jerry Zhang, a medical student at Jiao Tong, who plans to take the test next February.

“Preparation means sacrificing almost all your free time,” he said. “Much of the knowledge demanded in the test is not fully taught at our own medical school, or is taught from a different perspective.”

The group meets every Sunday afternoon. Two members are designated to give speeches on two medical topics at each meeting. Discussion follows.

He explained why the exam is so difficult.

Step 1 is an eight-hour multiple-choice exam, taken on computer, to assess an applicant’s knowledge in basic sciences related to medicine.

The test can be taken in or outside the US. In China’s mainland, it is available in Shanghai, Guangzhou or Beijing.

Step 2 includes a nine-hour multiple-choice examination on clinical knowledge and a test on clinical skills with standardized patients. The latter part is offered only in five cities in the US.

Step 3, the final one, is a 16-hour computerized examination divided over two days in the US. It is usually taken during residency.

Yang Zhang, a PhD student at his sixth year of medical school at Jiao Tong, just returned from Los Angles, where he completed his second part of Step 2 exam in May.

“Each examinee had 15 minutes to complete history-taking and clinical examination of each of 12 sample patients, and 10 more minutes to write a patient note describing the findings, initial differential diagnosis and a list of initial tests,” he said. “Patients score each examinee on our outlook, attitude, English and professional skills.”

He added, “It was an enlightening experience, and I am fully ready to practice in the US and come back to China as a top doctor in the future.”