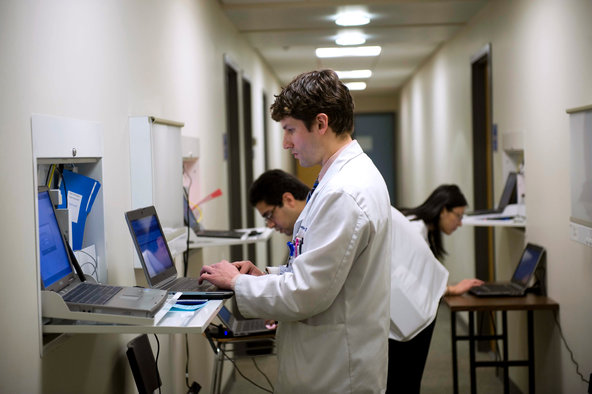 One night early in my internship, I received a frantic page for help from a fellow intern.

Seasoned nurses had been unable to draw a patient’s blood, which senior doctors had ordered be done if his fever spiked, so they’d called the covering doctor, the first-year resident on call. For more than an hour he had poked at the patient’s arms and legs, littering the floor with blood-stained gauzes, used alcohol swabs and crumpled syringe and needle packaging. When the patient finally kicked him out of the room, howling, “I’ll hit you if you come near me again!” he called the only people he thought he could: the other interns.

“We didn’t have to draw blood in medical school,” he confessed, his eyes red behind his Harry Potter spectacles. “My med school didn’t think it was important for us to learn.”

One of us did manage to get the required blood, but for the rest of the week, we were haunted by the feeling that any one of us could easily have been in the same situation.

We had all endured four years of medical school, and we believed that all our lectures, exams and national standardized tests had made us ready to be real doctors, or at least capable interns. But the reality was that in some cases, we were unable to carry out even the most routine duties.

The intern who did get the patient’s blood on her first try had had plenty of phlebotomy experience in medical school. But she confessed she didn’t know how to prepare a patient for surgery, and had had to ask another intern to write the pre-op checklist on an index card that she could keep in her white coat pocket. The intern who wrote up the checklist came from a medical school where students prepared a lot of patients for surgery but rarely did anything in the operating room. When asked to assist on a minor procedure during her first week, she had been so awkward and unsure of herself that the scrub nurse burst out laughing.

Memories of those anxious first months of internship rushed back recently when I read about a new effort to improve the transition between medical school and residency training in the journal Academic Medicine.

Each July at teaching hospitals across the country the most seasoned residents leave to begin independent practice, younger residents behind them move up a rank, and freshly minted M.D.s take their place as interns at the bottom of the ladder.

The transition can be perilous: patient outcomes can suffer, and young doctors can be particularly vulnerable to burnout. Observers have long attributed the notorious “July effect” to the rookies who have stepped up to the plate, but in the wake of major reforms in the way doctors and residency programs are accredited, medical educators have begun believing that there’s another reason.

Beginning in 1999, accrediting organizations began to studyhow they might better assess the competency of young physicians. Too much weight, they thought, was placed on counting the time spent in training and not enough on gauging measurable skills.

To remedy this weakness, they introduced a set of defined “competencies” to judge the preparedness of young doctors. In the process, however, they discovered another serious flaw in the system. Instead of working as parts of a seamless and well-conceived whole, medical schools and residencies were operating independently of one another, teaching and emphasizing aspects of medicine that weren’t always relevant to the next step of a young doctor’s career.

One of the most glaring examples of this was the transition between medical school and internship. Although, for example, most medical schools required that senior medical students complete a “sub-internship,” a month in the hospital as an acting intern, few structured this requirement around common goals, guidelines or input from the directors of residency programs. Moreover, depending on the hospital, the team of senior doctors and the medical school’s particular educational philosophy, the sub-internship experience could vary widely, with some students toiling away as full-on intern replacements and others languishing on the sidelines as extraneous observers.

Educators in some of the smaller specialties, like surgery,family medicine and obstetrics and gynecology, responded first, holding conferences and conducting specialty-wide surveys to create explicit goals for students preparing for their internships. Late last year, a panel of experts put together by the Association of American Medical Colleges came up with a set of general skills that medical students needed to have before starting a residency, skills like conducting a physical exam, recognizing clinical emergencies and obtaining informed consent for procedures.

Now educators in the largest specialty, internal medicine, which attracts as many as a third of all medical students, have begun a similar effort, the article in Academic Medicine explains. They distributed a questionnaire to their colleagues at residency training programs, asking them what skills were necessary for students starting internships, and nearly 300 program directors responded. And while their answers were not entirely surprising, the degree to which they agreed was.

The overwhelming majority believed that interns should show up on their first day of work knowing when to ask for help, how to communicate well with nurses and how to manage their time. Only 5 percent believed that new interns needed to have more medical knowledge or procedural experience before starting work.

“With so much agreement, you might wonder why it has taken us so long to coordinate our education and training,” said Dr. Steven V. Angus, the lead author and program director of the internal medicine residency program at the University of Connecticut School of Medicine in Farmington. “But we educators had this silo mentality and were thinking, ‘I know what my job is, and someone else can deal with what happens to the students before or after.’”

During the last attempt to create sub-internship guidelines for internal medicine in 2002, for example, fewer than a quarter of residency program directors responded to the survey. Guidelines emerged but the reaction was tepid; like customers at an all-you-can-eat buffet, the majority of those in charge of the medical school sub-internships picked only those recommendations they deemed interesting.

But Dr. Angus and his co-authors are optimistic about this latest effort. For one, it appears to be the largest collaboration ever taken between internal medicine educators in medical schools and residencies. And with three-quarters of the program directors responding to the questionnaire, it also represents the most enthusiastic one, a sign that old attitudes are changing.

“We’re stepping out of our silos and talking a lot more now,” Dr. Angus said. “And most of us are embracing the change because we know it will be better for our students and for the patients they care for.”